So here’s what all the big to-do was with Alanis Morissette this week.  A little back story first, though. 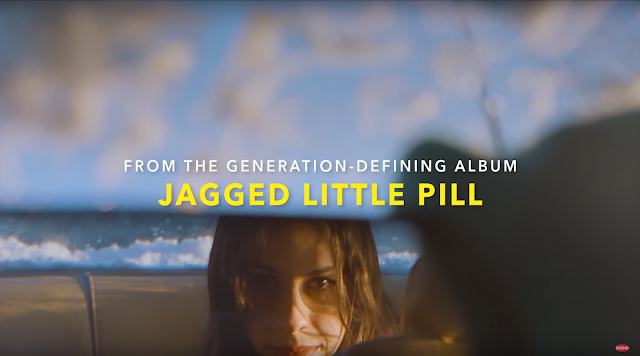 We’re trained audio professionals.  David and Craig have pieces of paper from snooty universities that say so.  But in the tenure of our lives, we’ve expanded our expertise into video.  We grabbed hold of it, learned it, developed it – until it became a staple of our business model.

Over the course of the past several years, we learned of a vast stockpile of film assets in our clients’ libraries.  You see, when videos were first a thing, they were shot on film then transferred to some inferior video format, like 1”, Beta SP or DigiBeta.  The quality the MTV generation grew up with was really crap.  I mean, we didn’t much notice or care because Oh my god Simon LeBon is SO cute! and My, that Eurythmics video is strangely arousing and frightening at the same time.  We were distracted.

Eventually it came down to budget.  Video Killed The Radio Star, the first video aired on MTV at 12:01 AM on August 1, 1981 (dang – we share a birthday!), was shot on video.  Heck, everything was then.  Film is expensive, and producers and colorists were experimenting with pushing tone and black levels to their limits – something that came easy with the limited gamut of SD video.  This was the age of Esprit clothing and parachute pants, you’ll recall.  We had little to no shame.

But when an artist really broke through, or a label really wanted to market the hell out of a newcomer they were sure they could break overnight, film became the medium.  Burgeoning artists like Madonna, Red Hot Chili Peppers, The Notorious B.I.G. and Stone Temple Pilots were given free reign to shoot all the film they wanted.

Fast forward to the mid-2010s.  We had firmly established a video production process that serves the digital supply chain from video post house to the labels’ Delivery Service Partners (DSPs).  We had witnessed the growth from SD video (720 x 540 in the US, 720 x 576 in most of the rest of the world) to HD, which is generally 16:9 video at a height of either 720 or 1080 pixels.  There were growing pains, as the ATSC took about four years to define and produce 1080p, the higher quality, non-interlaced version of HD video.  I am not a fan of interlaced video, though I understand why it exists.*

We began to witness some video content coming across our supply feed that was shot at 4K.  And why not?  Many manufacturers were starting to support it (and 8K, for that matter), and some of the larger budget production companies were happy to adapt to the RED Dragon and other such useful cameras.  Anyone worth their salt was moving with the times.

But then we started wondering about the provenance of excellent videos we had already processed.  We had already begun developing some very successful and groundbreaking innovations around film and video restoration.  I then developed a lust for film. 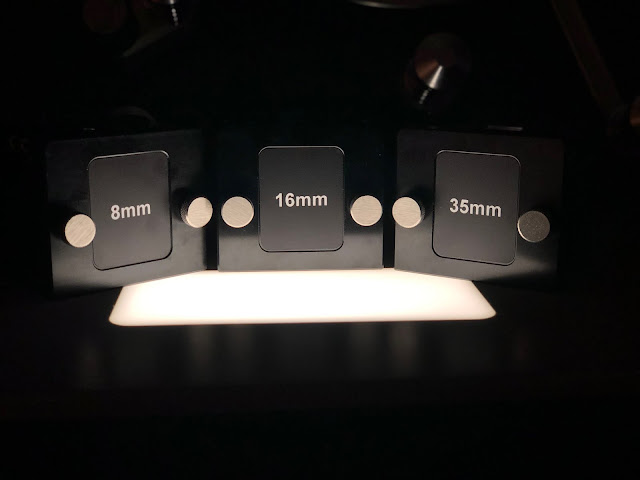 We identified several videos in our clients’ libraries that were shot on film yet released in SD.  Snow by RHCP.  Interstate Love Song by STP.  Numb by Linkin Park.  Hand In My Pocket by Alanis.  Hmm.

We then identified a number of film scanners, some affordable and some not so much, that we could leverage against the budget of the music industry.  Know this: the film and television industries’ budgets are about ten times that of the music industry.  Put away all your delusions of fat cats named Clive or David lighting cigars with $100 bills amongst a sunken shag rug executive suite lousy with hookers and cocaine.  Those tales died with the 1970s.

We were pretty keen on the Blackmagic Cintel 4K scanner.  It was cute, compact, hung on a wall (!) and the marketing campaign featured very pleasant looking ladies easily operating the hardware in extremely unrealistic-looking production facilities that resembled a 50th-floor Manhattan executive suite, rather than an actual production facility.  I actually like what the folks at Blackmagic do – they are exceptional in many ways, but this one product seemed that it was trying a little too hard to not quite reach the finish line.  We had to spend more.

I asked my pal and former boss, Jim, for advice.  His team turned me toward the 4K Scan Station by Laser Graphics.  Despite everything about them sounding like 1978 (Pew! Pew!), we gave them a visit.  We took with us a reel from the 1986 performance of The Cure from Orange, France.  We transferred two songs from the show, had the mag reels digitized sync’d them up, and touched up the dust and grit.  All in HD.  From 1986.  It’s amazing.

This piqued the interest of many around us, but not everyone was willing to wade into the water, until a friend from Rhino approached us one day.  “How much would it cost to re-create Alanis’s Hand In My Pocket from film?”  Within a month, and after a ten-second test run of Ironic, we, the label and management agreed to re-create all five videos from Jagged Little Pill for presentation at 4K.

They are all available on YouTube now, and if you read the comment section, they’re on fire.  I wish there was a way to look at the old versus the new, but the best I can suggest is to look up the Alanis 4K Trailer on YT.  It’s got a pretty good before and after visual summary.

Working in film is an incredible thing.  Conforming these iconic videos to the standard definition versions is challenging, not only because of the color balancing issues (film IS weird), but because you’re battling the cadences of the 1995 transfers.  We no longer have to use 0.1% pulldowns and repeat frames for a 3:2 cadence.  It’s just 24 frames per second.  But the sync gets iffy, so you tend to lose a frame or two here and there.  NBD.

We started with the lowest hanging fruit – Hand In My Pocket (16mm).  Lowest hanging, because there was no real color grading, just exposure, black level and white level controls.  Easy, right?  No.  Not easy.  For one thing, there is a shit-ton of footage.  Six takes of Alanis driving the car at the top of the video; eight takes of the dudes on bicycles; four of those creepy monsters in the parade (who would do that to a crying baby) and probably 30,000 ft of footage that wound up on the cutting room floor.

Our workflow is methodical:  one of us creates a spreadsheet from the original music video, calling out each cut relative to the video’s timecode: 00:17:23 CT band OOF marching R>L revealing dude in wifebeaters and shades holding a smoke; DT transvestites waving at glittering float; out at 00:18:16.

Another of us goes through each reel documenting what exactly is on that reel.  Remember that this is MOS film (the industry adopted the German acronym for mit-ohne sound – without sound in Englisch – and it stuck):  SYNC band performing in church, crane camera to Chester’s right, eyes closed, occasional pivot R>L to Mike on piano, Mr Hahn in BG, OOF.

Other pitfalls occur during the editing process.  The girl during the line “I’m poor but I’m kind,” – she’s reversed horizontally.  There’s a shot in the beginning with a car that was edited out in ’95 with some clever masking.  All of this takes a sharp eye to identify and reproduce the right shot.

I’ve seen several questions about this video, including “Why is this not 16:9 like Ironic?”  I’d love to have produced this at 16:9, but it wasn’t shot that way.  We were asked to reproduce the cuts as faithfully as possible to the original, and that’s what we’ve tried to do.  “Don’t break it,” is our prime directive.

You Learn (16mm) is an experiment in color bloom and black level crushing.  We really wanted to explore different color and depth options, given the HDR opportunities available to us, but management’s directive was clear: match as closely to the original as possible.  Crush and bloom it is.

Ironic (16mm) was actually a lot of fun.  Because the cameras mount the reels on the top, a lot of the shots were difficult to position inside the car.  The production crew’s solution was to mount the camera in the car upside-down, then fix the orientation in post.  It worked, but it’s difficult to identify shots when you’re working upside-down.  That was an interesting session.  We used the pattern of the snow on the windows to identify the shots that were used – you learn to use the oddest cues when conforming to someone else’s work.  Oh, and we learned late in the process that the actual original cut was at 25 fps, so that was fun.  Our version is at 25 as well. 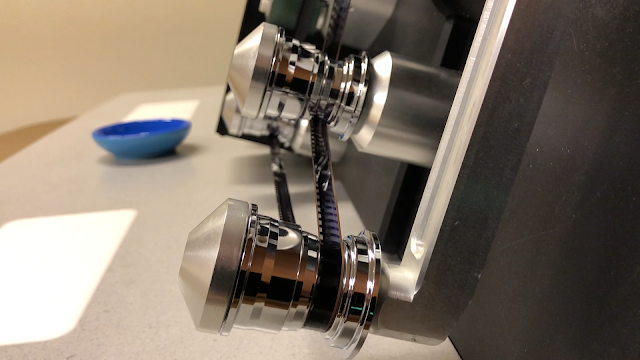 Head Over Feet (35mm) is a one-shot, non-edited version, though she did some eighteen takes, and it took a lot more grading than one might think.  That’s stamina.  But You Oughta Know (8mm and 35mm) is by far the most rigorous endeavor of the album.  Filmed at Badwater (and other locations) in Death Valley, California, the video captures the anger, the desperation and the insanity of the song.  The average length of each cut is 12 frames.  They shot 29 reels of 8mm film and two reels of 35mm film shot at 8 fps with a Nikon F motor drive.  It was nearly impossible to resist abandoning the original direction of the video and embrace the amazing quality of those brief 35mm shots, but the mandate prevailed, and we filtered everything heavily through a haze of orange.

Restoration is necessary for nearly every film reel.  Dust specks, hairs, scratches, dirt and general schmutz are inevitable by-products of film.  A restoration effort depends greatly on how the film was handled and stored over the years.  Most of these reels were treated well.  You Oughta Know was heavily warped, and some reels were pretty dirty.  Working with 8mm is a challenge, especially at 4K, because every image is about the size of a well-trimmed pinkie fingernail.

So for this 25th anniversary of Jagged Little Pill, our friends at Rhino Entertainment have come through and celebrated its release in the best way possible.  Re-imagining these releases at 4K is the right way to honor this landmark record – the Tapestry of the 1990s.


*We'll post more on interlaced video and its unfortunate history a bit later.  Those of you who have seen my lectures will find the subject matter familiar.