The music industry is enjoying a resurgence in vinyl sales these days, thanks to hipsters, high-school students and tenacious audiophiles who still feel that surface noise, an antiquated RIAA curve and recycled vinyl make a sound recording more "authentic" or "warmer" than digital.  I'm not going to go off on the vinyl vs digital thread here (though I will later), but I do want to highlight another survival story that has slowly bubbled to the surface in the wake of vinyls's recent success.

That surviver is Quadrophonic Audio.

Perhaps because of today's vinyl surge, or perhaps despite it, we have been recently exposed to a number of archive projects dealing with Quad mixes, and our good friends at Rhino Entertainment have taken the bold move of releasing it to the public.  The Chicago box set, lovingly named Chicago Quadio Box, is set to hit the streets on April 29.  It contains the band's first nine studio albums, from Chicago Transit Authority (aka Chicago I) to Chicago X (Chicago IV was a live recording recorded straight to stereo, and therefore never rendered as a 4-channel product).

After the release and success of Chicago V, the band's entire collection was mixed to quad up until their 10th release.  We had the privilege of restoring, mastering and authoring these titles to 192kHz, 24 bit Blu-ray here at CMD.  Very cool stuff.  It's great that we can present a historic collection like this in such high fidelity for consumers to reproduce in their own home entertainment systems.

I have to say that it sounds phenomenal, and I really appreciate that the band took bold risks in utilizing the multi-channel format (horns only in the right rear, organ and hand claps only in the left rear, etc.).  Not every recording weathered the test of time as well as the others (and yes, the band did produce some of the sappiest songs of the decade as well), but overall, it is a beacon of rhythm and brass that has stood the test of time.

So it's cool that we are able to deliver this in such high fidelity to anyone with a surround home theater system.  It's easy: four channels of HDMI out of your BD player and into your receiver; we just ignore the center and the sub - you won't tell the difference.  But while working on this project (we started in February of 2015), some of our younger crew began asking what should really be an obvious question today: How did people experience Quad audio in 1972?

Naturally, one would need a 4-channel amplifier component with 4 speakers delivering sound to the room, but what delivery methods did the music industry use to get Quad to the masses?  It turns out that there were three main Quad delivery formats back in the day, one of which is brilliant, if not imperfect.

The first system was open-reel 4-channel tape.  You could purchase a 7" reel for your 4-channel, one-direction 7.5 IPS tape deck, which fed into your Marantz quadrophonic hi-fi.  Very hip at the time (did you know they actually made quadrophonic headphones back then?). 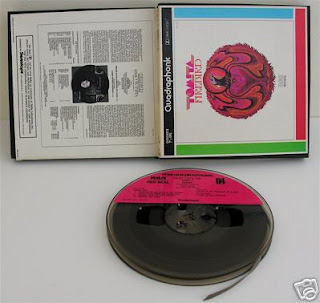 The second (and most popular) format was 8-track tape.  Most cars in the 1970s that had any more than AM radio (or even more typically, single-channel FM) boasted a groovy 8-track cassette player.  Some sprung for the happening Quad upgrade, so you could park behind the drive-in and suck face to Dark Side Of The Moon all night long.  Literally.  8-track players never stop once they get to the end of the tape - they flip over and play the next "side."  I have no idea how this played out for the Quad aficionados, but perhaps this is what got Tipper Gore so worked up about listening to Black Sabbath backwards.  If Paranoid were ever released in Quad.  I don't know. 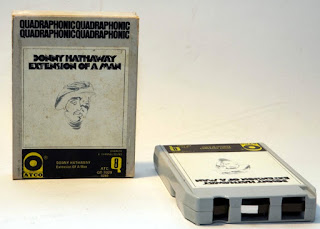 You know it's Quadrophonic 'cause it says so 4 times.

For my money though, the most interesting and unlikely delivery format in quadrophonic hipness was vinyl.  That's right: four channels of discrete audio delivered by dragging a metal stick over a hunk of wax that rotated 33 1/3 times per minute.

But wait - how does that work?  The mechanics of vinyl are that there are two walls to the groove of the record.  Each wall has a unique topography that represents the audio information of each channel, left and right.  The needle responds to that topography, and through a series of magnets, inductors, filters and preamps, pushes out two channels of audio per disc.  By definition (and limited by physics, man), you can only ever get two channels out of a record.

But they did it.  And they were very clever about it.

So as an audiophile and a guy who argues in favor of high-resolution, high bit-depth PCM audio all the time, I feel compelled to stop right here and mention that I am not applauding the fidelity of multi-channel audio delivered on vinyl.  There are plenty of quadrophonic screes out there bemoaning the failure of Quad on vinyl, mostly because it's a matrix-based format prone to degradation over time, but I'm going to praise the solution (or at least one in particular - there was more than one Quad-on-vinyl scheme out there at the time), because it is a very clever feat of engineering innovation.

The solution, as just mentioned above, was in a matrix.  A matrix and a very high-frequency component.  The solution we will focus on here is CD-4 (Compatible Discrete 4), aka Quadradisc.  CD-4 was developed in 1971 by RCA and JVC.  Part of the problem was that the music industry had introduced this new 4-channel format to the world, but most of the world was grooving to their tunes literally with grooves - vinyl.  Everyone was still buying vinyl, but not everyone had a Quad system installed at their pad.  So how do you make a quadrophonic record that is still compatible with all the still-remaining stereo LP players in the marketplace?

The answer: make a stereo-compatible piece of lacquer, and push all of your additional channel information up onto a subcarrier that lives at a higher frequency than the human ear can perceive.

In a regular stereo system, the circuitry (and hardware) are limited to an upper-frequency range of about 20kHz.  This is similar to CD, as our human ears are unable to directly perceive much information above 22kHz (more for kids, of course).  The CD-4 system takes advantage of this natural "flaw" in our aural intake, and pushes the frequency response of the needle and circuitry up to 45kHz.  At 45kHz, they introduced a subcarrier that was then FM modulated to carry the Quad information for those with Quad compatible systems.

That's where the matrix comes in.  Remember that we have to keep these discs playable for regular stereo owners, too.  How do you do that?  Easy.  Just add the Left Front channel (Lf) and the Left Rear (Lr) channel together, and put them on the left wall of the record.  Add the Right two channels (Rf + Rr) together and do the same.  But if you take the difference of the left channels and the difference of the right channels and place them on that 45kHz subcarrier, BOOM!  You've got a matrix.

So here's the deal:  Left Channel (under 20kHz) is just L = (Lf + Lr).  Its 45kHz subcarrier is Ls =(Lf - Lr) - a difference signal.  Right Channel under 20kHz is R = (Rf + Rf), and it subcarrier is Ls = (Rf - Rr).  Upon playback, you filter each channel such that the lower frequency component goes to one side and the upper frequency component goes to another.  Demodulate the FM subcarrier to get your difference signal, then simply add (L + Ls) to get the discrete Left Front (Lf) channel and subtract (L - Ls) to get the discrete Lr channel.  Do the same with the right two channels, and you've got discrete Quad audio delivered on two-channel vinyl.

The result?  Genuine engineering brilliance (with a tip of the hat to the NTSC's solution to the color sideband solution dating back to 1953).  More on that later, but we got discrete 4-channel audio out of a 2-channel delivery system, and if you notice, people with stereo audio systems didn't notice a thing, because the Lf and Lr components stayed in their left speakers (and similarly for the right), and no additional information was added to or subtracted from their listening experience.

Over time, one would find that after multiple plays, the 45kHz subcarrier signal would degrade, due to the physical stress of dragging a diamond stylus across a piece of vinyl.  The response was to manufacture harder, wear-resistant vinyl and a differently shaped stylus to improve the durability of the subcarrier component.  However, by the 1980s, the downward-turning economy and the promise of CD soon overshadowed the desire to spend money on crackly 12-inch obelisks, and the 4.75-inch shiny round thing took control of the audio consumer's market.

Mark Anderson is a nice guy with a very outdated website (I know - who are we to complain, right?), but he's got very useful information if you care to look further into the history of the quad world.  He can be found here:
http://www.surrounddiscography.com/quaddisc/quadplay.htm

Posted by Craigman Digital at 9:51 AM